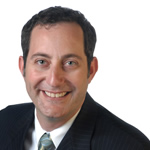 Sean Gerowin is an author, educator, filmmaker and father, who fell in love with New Orleans at The World’s Fair when he was a teenager on a family vacation.

After being accepted into Tulane University and graduating with a B.A. in Social Science, Gerowin earned a post-baccalaureate Teacher Certification in 1996, then moved on to complete studies at UNO to earn an M.Ed in Administration in 2003. For eight years, he taught social studies courses in the Orleans Parish Public School System — seven of them at Booker T. Washington High School. After Hurricane Katrina reshaped the landscape of the city’s educational system, Gerowin became a real estate agent, putting to use skills and knowledge from previous years teaching free enterprise.

Gerowin has written two children’s books which were illustrated by his wife, artist Karoline Schleh-Gerowin. Sean is also an independent filmmaker, who produced several short documentaries and two feature films. He is on the Board of three non-profits, The Urban Conservancy, Stay Local! and Funny Bones Improv.